Artificial Intelligence, as the name suggests, is the intelligence created by humans. It is construed as complex machines using computer properties and performing various actions just like we the humans.

New machine learning algorithms were limited to basic AI, but now it has become an essential part of this system. Many complex algorithms are prepared to give better experience. For instance, it has revolutionized our experience of watching movies and shows. The entertainment industry is using this algorithm for providing suitable suggestions to its viewers on web channels like Netflix and Amazon Prime.

In short, we can say Deep Learning and Machine Learning are two concepts related to Artificial Intelligence. The two combine to improve the future of AI, but standalone they are not artificial intelligence.

Artificial intelligence is a branch of computer science that creates machines which are capable of solving problems and learning like humans.

Where do Robotics and AI Converge?

AI is a constellation of technologies that manifests in different forms. It gets categorised in different ways based on their rationale and the implications as follows:

A general framework of an AI system contains three segments: Sensors that generate data, Processor that process the data generated by sensor and physical and software agent that takes decision based on this data. Therefore, AI algorithms absorb data generated by sensor, process it as per its artificial human intelligence, and then generate actions.

Based on the framework cited above, AI technology is classified into different building blocks. These building blocks form a core area of interest and a sub-field in the study of AI. 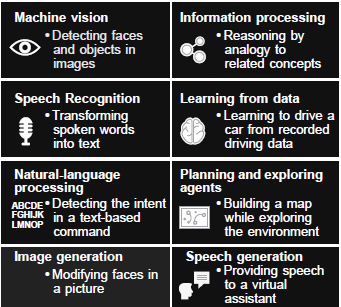