The report on ‘Household Social Consumption: Education in India’ as part of 75th round of National Sample Survey – from July 2017 to June 2018’ provides for state-wise detail of literacy rate among the persons aged seven years and above.

There has often been a conjecture around South Indian states being more literate than the North, however, the latest data debunked that.

The report shows the southern state of Andhra Pradesh as the worst among all states in India in terms of literacy rate, even behind Bihar’s 70.9%. While Andhra’s literacy rate is at 66.4%, Telangana’s is 72.8%, which worse than the national average of 77.7% and Karnataka’s is 77.2%. 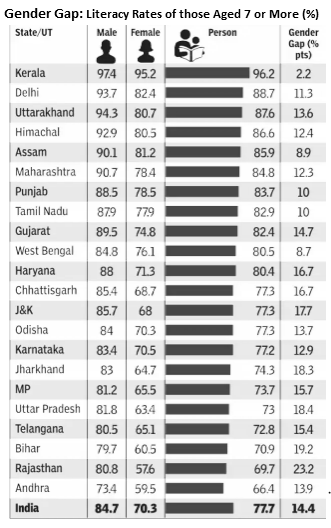 The shapes of economic recovery is determined by both the speed and direction of GDP prints. This depends on multiple factors including fiscal and monetary measures, consumer incomes and sentiment.

Which Shape of Recovery is Favourable?