During his recent visit to the US, PM Narendra Modi gifted Kamala Harris (US Vice President) a copy of old notifications related to her grandfather, PV Gopalan, in a wooden handicraft frame (PV Gopalan was a respected government officer who served in various positions in India) and a gulabi meenakari chess set. Later, while meeting with other Quad leaders, he gifted Australian PM Scott Morrison a silver gulabi meenakari ship and a sandalwood Buddha statue to Japan’s Prime Minister Yoshihide Suga. He also presented Joe Biden with documents that could help him if he had any relatives in India. 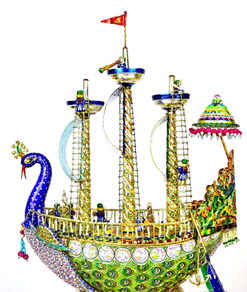