Scientists have discovered the fossil of a Madtsoiidae snake in the Himalayan mountains in Ladakh, which sheds fresh light on the prevalence and existence of this rare serpent species in the Indian subcontinent. 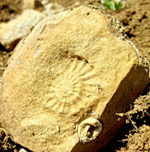