A new measurement of a fundamental particle called the W boson appears to defy the Standard Model of particle physics, our current understanding of how the basic building blocks of the universe interact. 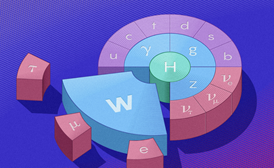