On 22nd October 2021, at a London meet of Trade Ministers from the Group of Seven (G7) nations (United States, Japan, Germany, Britain, France, Italy and Canada), they came to an agreement on principles to govern cross-border data use and digital trade. 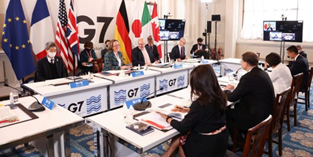 A Concern for India

Treaty On The Prohibition Of Nuclear Weapons Enters Into Force

The Treaty on the Prohibition of Nuclear Weapons (TPNW) entered into force on 22nd January 2021.

NPT – The Treaty that still Hangs in Balance

Why NPT is still not Implemented

Why India not a signatory to NPT?

Impact of US Withdrawal

Process for a Country to Exit Paris Agreement

Possibility of USA returning to the Agreement

What is Nuclear Suppliers Group (NSG)?

Retaliatory Import Tariffs On US Products

India extended the deadline to impose retaliatory import tariffs on 29 US products till June 16 from the earlier date of May 16 with a hope to resolve trade issues with the US and also because the US has not withdrawn the Generalised System of Preferences which was to happen in the beginning of May.

India had announced retaliatory tariffs worth $230 million on about 29 American goods in June 2018 as a comeback to imposition of penal tariffs on Indian steel and aluminium by the US. But India has since been postponing implementation of these duties hoping to resolve trade concerns.

India hosted a two-day WTO ministerial meet of 16 developing and six least developed countries at New Delhi from 13 May-14 May. In the meeting India highlighted the issue of WTO’s assessment of a country’s services trade.

Geneva Convention came into the light when Pakistan had captured Wing Commander of India Abhinandan Varthaman.

What are the Geneva Conventions?

Is it applicable only during the Wars?

The provisions of the conventions apply in peacetime situations, in declared wars, and in conflicts that are not recognized as war by one or more of the parties.

Does the case of Wg. Cmdr. Abhinandan Varthaman fall under the ambit of Geneva Conventions?

Yes, even if both the countries are not engaged in a declared war, provisions of Geneva conventions are still applicable as the Wing Commander is not charged on espionage (in case of espionage, Geneva Conventions do not apply). It must be noted that the Geneva Conventions covers a very broad range of issues.

What are Rights given to Prisoners of War (POW) under the Convention?

Who Monitors the Release of POW?

International Committee of Red Cross acts as a mediator in the cases related to POW.